MAX IT! Session one was a perfect kickoff for convention weekend - Chuck Norris.

Max’s founder Steven K. Scott and his wife Shannon. Steve and Shannon were beyond excited to present, what Steve called his “biggest moment” of his life. The introduction of our guests of honor the Max It! convention: Chuck and Gena Norris. 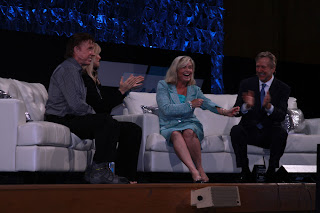 Chuck and Gena were welcomed by thunderous applause from the audience as they sat to talk with Steve and Shannon. They talked about their years of friendship, and while their relationship started out as purely business, eventually they all became the closest of friends. This was so gratifying because it perfectly echoes Max’s ethos that life is not just about the business, it’s about the people you reach out and touch. Here are some of the highlights from their talk:


Chuck and Gena were actually some of the first people to use the Max product, they met Dr. Keller with Steve back in 2006, and from that point Chuck started taking MaxGXL.

While on the campaign trail with Mike Huckabee, Chuck gave the Presidential candidate Cellgevity as his “secret weapon” to help keep him active and healthy while traveling the country.

Chuck and Gena’s children are all active in competition. Their twins Dakota and Danilee both tested for blackbelts, a grueling 2 hour test, at ages 11 and 12 and were both helped by the Max products.

Chuck is very outspoken against energy drinks, because he hates the harm they cause to kids’ bodies while providing cheap energy. He has had several offers to do energy drinks, even one that would have been Chuck branded, but there’s nothing that compares to Max and Max ATP.

Despite having known Steve and Max for years, Chuck and Gena were always hesitant to be an official part of the company or show their support in public. To make sure this was a smart investment, Chuck told his lawyers and business Associates to do a thorough investigation into the history, science, products, compensation, and reputation of Max International. Chuck’s business Associate, Reg Cochrane, was then invited on stage to explain a little bit about the due diligence that was done when they looked into the company. Reg admitted that threw the toughest questions at Max and held nothing back. The company, in turn, embraced all the questions and more for a long 7 months of interviews and research. 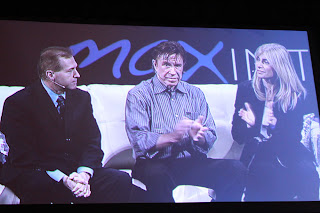 The result? Having worked in network marketing before, Reg was confidant to claim that Max was “as close to perfect as he’s seen” with the products, the company, and the Associates.

When asked how long Chuck and Gena plan to be at Max, the answer was simple: forever.

The winners of the Ultimate Power Lunch were then welcomed onto stage to be recognized. They then exited to head to their exclusive lunch with Chuck and Gena Norris, Chris Mullin, and the Max Executives.
Posted by Unknown at 4:36 AM